Factfulness: Ten Reasons We’re Wrong About the World – And Why Things are Better Than You Think

Factfulness: Ten Reasons We’re Wrong About the World – And Why Things are Better Than You Think

I became acquainted with Hans Rosling in 2007 when I first saw the video from his TEDtalk. In addition to the immensely entertaining presentation, it also reminded me of the bias we exercise in our daily dealings with people and decisions, which all too often leads us to make the wrong conclusions. Hans Rosling’s presentation meant that I now always have my iPhone in my pocket and can quickly check when I hear or read something that I think seems suspicious or which I do not know whether is factually correct or not. I have to admit that it has spoiled many of the kind of discussions where participants do not know the facts and therefore defend claims based on what they think and believe.

Halfway through the book, I participated in a literary event where some of the attendees were presenting books that they found particularly interesting. I presented Factfulness and prompted the participants to answer the same questions with which Hans Rosling began his lectures. The results were entirely in line with the author’s experience. Systematically, the answers were wrong on almost all questions. Our perception of the world’s state is apparently still out of step with reality.

The good thing about the book, which is well written and readily legible, is that it goes a lot further than merely revealing that our knowledge of the state of the world is outdated and erroneous. It also explains why it is so, what the consequences are, and what we can do to get better equipped when we face the tsunami of information with which the media and other sources bombard us.

“It’s pretty much a journalist’s professional duty to make any given event, fact, or number sound more important than it is.” (Quote from the book.)

If we alone base our perceptions of the world around us on the information provided by the news media, we will forever carry a systematically distorted picture of reality. Also, when we completely ignore the fake news! The news media make a virtue of picking the dramatic exceptions, and although the information may be reasonably accurate, they together form a wrong picture of the state of the world.

Hans Rosling gives numerous examples of how insufficient insight, superficiality, and impatience lead to decisions and initiatives that did great harm. The “Just do it” and “we must do something” mentality that should demonstrate initiative and the power to act lead us to do stupid things, wasting time and money. When the missing or negative results become clear, the world’s attention has already moved somewhere else. However, if you can keep your focus and awareness for a while and dig a little deeper, then you will discover the cost of the rush and at least learn a lesson.

The author generously shares his own mistakes and explains in great detail what consequences they had. Learning from your own mistakes is, of course, important, but wouldn’t it be great if you could also be capable of learning from others?

From my time in high school I especially remember the teachers’ considerable efforts to make us understand that generalizations are fatal. They often lead not only to false endings but direct life-threatening conclusions.

Some of history’s most grotesque examples originate from the Nazi era (I have just reread Ian Kershaw‘s fabulous Hitler biography, which contains countless examples of how dangerous it is to leave the power to people who through propaganda can manufacture how reality is to be perceived).

The fire in the Berlin Reichstag in February 1933, allegedly carried out by a person with a communist background, was used to convince President Hindenburg to accept the Nazi’s demand for banning the Communist Party altogether, thereby eliminating all their representatives from Parliament and excluding them from future elections. That paved the way for Hitler, who had just become prime minister, to have the parliament vote for a law (The Enabling Act) that in practice abolished parliamentary democracy and led to his dictatorship.

When a Jewish person committed a murder of a German diplomat in the Netherlands in 1938, it was used to motivate thousands of Germans (primarily members of the military arm of the Nazi party, the SA) to expose the entire Jewish population in Germany to unprecedented abuse and humiliation (The Krystal Night).

Despite what history should have taught us, we continue to generalize. Probably because it’s an easy way to maintain our prejudices and opinions without having to get into the details, learn something new and think a few more steps ahead.

Hans Rosling is on the same errand and concludes:

“And, maybe most unfortunate of all, it [generalizations] can make us jump to conclusions about a whole category based on a few, or even just one, unusual example… Wrong generalizations are mind-blockers for all kinds of understanding.” (Quote from the book.)

His story about how wounded soldiers often suffocated in their own vomit, when they lay on their backs, lead to the recommendation that small babies should be placed on their stomach also, shows how dangerous it is to draw parallels without first examining conditions and circumstances closer. It turned out that when babies are put on the stomach, the risk of cot death increases significantly. In contrast to wounded soldiers, babies have a reflex that causes them to roll over on to their side as they throw up. Many babies died as a result of this unfortunate comparison.

Do not jump to conclusions

For those who wish to base their opinions and actions on facts, the book presents a solid approach. The 10 rules of thumb to review the news flow and to establish a sound and constructive skepticism can be summarized as follows:

Factfulness: Ten Reasons We’re Wrong About the World – And Why Things are Better Than You Think. 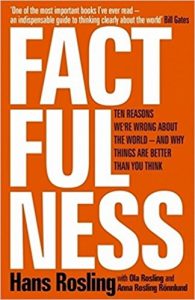 Title: Factfulness: Ten Reasons We’re Wrong About the World – And Why Things are Better Than You Think.
Number of pages: 352
Authors: Hans Rosling, Ola Rosling, and Anna Rosling Rönnlund
Publisher: Sceptre
Publication date: April 3rd, 2018
Price: EUR 9.99 plus VAT (Kindle)
Recommendation: Highly recommended to anyone with an interest in world matters.
Reviews: The book has received many good reviews in the media and from readers.

Hans Peter Bech
Hans Peter Bech is a bestselling author and a frequent blogger on how to make information technology companies global market leaders. He has produced numerous books, papers, podcasts and videos on international business development in the IT industry. Hans Peter is also a keynote speaker, workshop facilitator, and an advisor for governments and companies. He holds an M.Sc. in macroeconomics and political science from the University of Copenhagen. LinkedIn: https://www.linkedin.com/in/hanspeterbech
Recent Posts
Most Recent Projects
ADMINISTRATOR
Emma Crabtree
Phone: + 351 965 454 775
ecr@tbkconsult.com