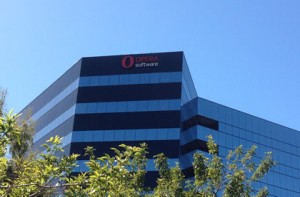 Commuters on Silicon Valley’s busiest freeway, US 101, will notice a large new Opera logo atop a shiny office building in San Mateo, California.

Opera Software’s (Oslo, Norway) new and improved visibility is a reflection of the company’s growing success as a global powerhouse in the mobile ecosystem and its significant expansion in Silicon Valley — inaugurating a new 20,000 sq. feet office, employing more than 100 people, with plans for aggressive growth for the rest of 2012 and beyond. These new offices are now home to Opera Software’s subsidiaries, AdMarvel and Mobile Theory, as well as Opera’s US branch office.

In the past year, Opera Software has further increased its leading position in the mobile browser market, surpassing more than 200 million monthly unique users for its Opera Mini and Opera Mobile browsers and Opera’s subsidiary, AdMarvel, has very quickly established itself as the world’s leading mobile advertising platform. AdMarvel’s mobile ad platform manages over 35 billion ad impressions a month from more than 9,000 publishers. In 2011, this platform enabled over $240 million in revenue to mobile publishers globally.

The innovation driven from the US office includes the Opera Advertising platform; the Opera Payment Exchange (OPX), which enables easy payment options for users of Opera’s mobile browsers; and the Opera Mobile Store, a multi-platform mobile app store that is now the fifth largest worldwide.

In the last 12 months, Opera Software and its subsidiaries:

“It was not long ago that we celebrated Opera crossing 100 million users for our mobile browsers and the assembling of our mobile advertising platform. Since that milestone in February 2011, Opera has doubled its users in less than 18 months, and gained status as the leading provider of mobile advertising services,” said Mahi de Silva, CEO of AdMarvel and EVP Consumer Mobile, Opera Software. “We are placing a strong bet on our US assets by expanding our team here and hiring the best talent in Silicon Valley to deliver the best mobile products, tools and services to consumers, developers, publishers and advertisers — globally.”

The worldwide World Wide Web — any device, any platform, any bandwidth, absolutely anywhere in the world. Opera Software was founded in 1994, based on the idea that access to the web should be a universal right. 270 million people (and counting) use the Opera web browsers for computers, mobile phones, TVs and other connected devices. Opera also delivers tools, distribution, engagement, monetization and market insights to developers, publishers and brands around the world. We are passionate about breaking down barriers, so everyone can share in the power of the internet. Our vision of one web for all remains at the heart of what we do, because we believe that participation changes everything. Opera Software ASA is listed on the Oslo Stock Exchange under the ticker symbol OPERA. ‘Opera’, ‘Opera Software’, ‘Opera Mini’ and the ‘O’ logo are trademarks of Opera Software ASA. All other trademarks are the property of their respective owners. Learn more about Opera.